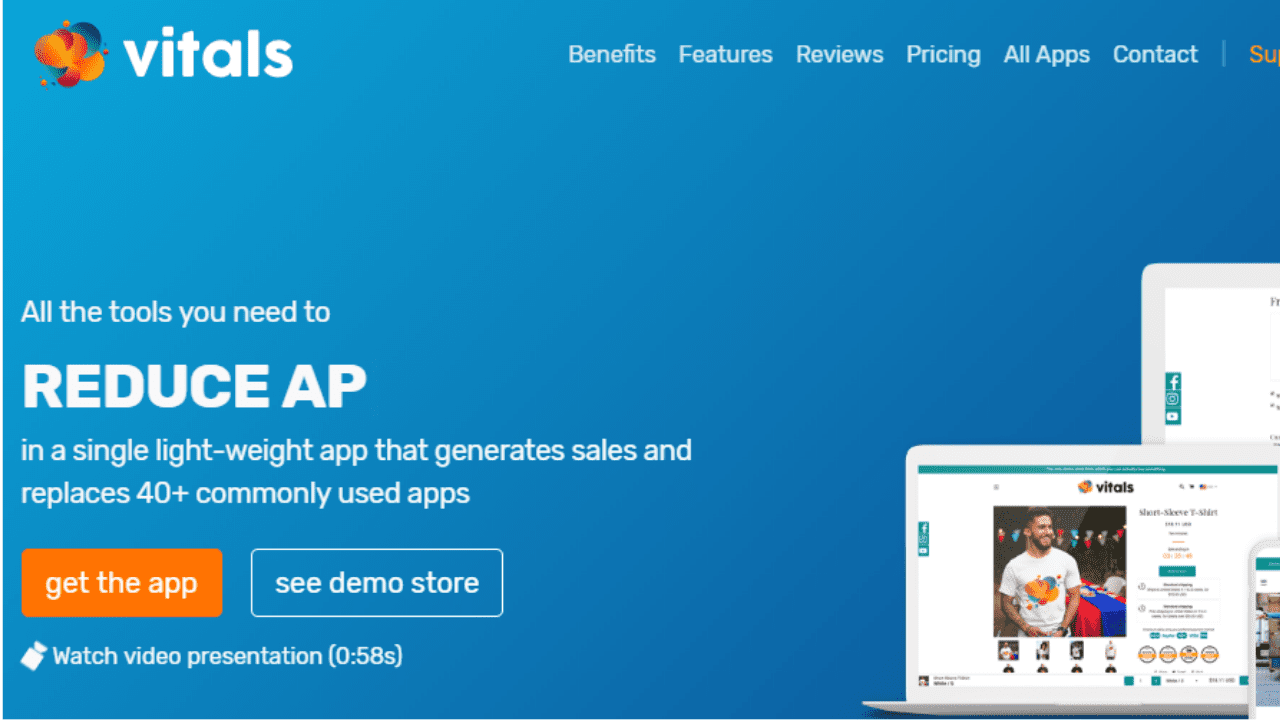 Reviews
1. AliDropship Review : Custom Made Dropshipping Stores
2. VITALS Replaces 40+ Apps Commonly Used On Shopify
3. eCom Elites Review : Franklin Hatchett DropShipping Course!
4. Flex Theme Review: The Best Shopify Theme To Install (2023)
5. How To Use Sell The Trend To Find Dropshipping Products 2022
6. Intercart Review : The Game-Changing Checkout Funnel App
7. E-sniper Review : The Best Tool For Dropshipping Winning Products
8. EcomHunt vs Niche Scraper Which one Should You Use In 2022?
9. Shopify vs Square [2022]: Is It Better Than Wix Or Shopify?
10. Magento1 To Magento2 Data Migration Guide 2021
11. Step By Step Magento To Shopify Store Migration Guide 2021
12. How To Migrate From Magento To Woocommerce 2022
13. Modalyst vs Spocket 2021: Should You Install Both Or None?
14. 15 Best Ecommerce Platforms Comparison And Ratings 2022
15. Modalyst vs Dropified: The Ultimate Cheat Sheet 2021
16. What Is Zipify One Click Upsell Use For? ( Shopify Upsells )

VITALS is a combined 40+ apps into one app. Is a Shopify software that was developed to suit the global eCommerce market.

The app is used by thousands online store from over 120 countries and provides best shopping experience for over 20 million+ customers every month.

The 40 apps included are literally like all of the apps needed to increase sales, reviews for the products, an urgency timer, and a frequently bought together just like Amazon does say “People who bought this also bought…’ a lot of things can be done within this app.

It provides the benefit of reducing App Fees as it is monthly instead of dozens, and also provides the best support experience. Therefore, there is always a support team for the app, their customer support is like no other.

The app also have the animated Add to Cart button that enable people to choose, like , shake the cart, zoom it in, mess with it just to draw more attention. There is so much that can be done within this append it is $29.99

There are numerous benefits for the users of the app such as 1 click install and uninstall that never modify theme files. Also, it is revenue increase that is, it increase average order value and lift conversion.

Another benefit to look forward to is that it’s guarantee 30 days money- back with the easiness way to install and as well improve load speed which has being confirmed by lots of different independent studies and the fact is load speed is extremely important for eCommerce. 53% of people who visits are likely to abandon if the page takes more than 3 seconds to load as this will help the user to make more sales, know more about their customers and to have a better experience.

BBC also asserted that they lose an additional 10% of users for every additional second it takes for their site to load. The reason why it could take some minutes for Shopity store to load include:

Out of those two issues, the first one can be easily taken care of by using some certain tools like TinyJPG or Optimizilla.

With TinyJPG, the solution is not that obvious- the main culprit being “handshakes”. When you install 5 apps on your storefront and a customer arrives on your store, there are five requests made to five different servers around the globe.

The request means a set of connections (handshakes) which take a bit of time to exchange information and it’s depending on how well the app is built, it might take more requests such as content download, script files and images.

Though browsers are able to paralyze requests, depending on how well the apps is built and how well their servers respond which means it can take a while before some store is fully loaded.

This is why VITALS embarked on an incredible journey with a clear target in mind to build an app that takes in as much of the features usually used by Shopify store owners. VITALS, currently has 40 apps in one behemoth improving 20 millions+ page impression every month.

With the completion of Expansion Phase, it’s now time to show it publicly how dramatically fast it is. Therefore, it has been tested against some of the most installed Shopify apps ever.

How it got tested?

A free development store was launch, using the default Shopify theme that comes pre-installed and published on every store. Followed by importing some bogus products so as to have actual product pages to display on the test store.

The leading tool used is GTmetrix that helps to analyze the page’s speed performance and the results offered by the tool for the Shopify store takes 0.9 seconds for a fully loaded page.

In order to build trust for the app, Product Review is needed and this makes to adopt Loox Reviews that gives over 800 reviews and also imported some reviews from AliExpress in order to start quickly also, Free Shipping Bar by Hextom was added which gives above 6000 reviews and configured an offer of free shipping over $90.

Recently, 3 new apps were added to Vitals such as Stock Urgency, Pre-Orders, and Shipping information. Vitals is the only apps that suit 40+ Shopify apps which aimed at boosting sales by increasing conversion rate and decreasing page load time. In order to test VITALS, the developer started with uninstalling these apps not before exporting the reviews from Loox in order to import them in VITALS and keep the test results comparable. Five minutes later it’s done, no more apps, but somehow it still has Loox Reviews and Quantity Breaks partially alive on the store.

Testing the speed again after uninstalling those 7 apps, there are still some content that is not needed on the page and the load speed is more than double the initial one which is totally unacceptable, the leftovers from apps are plaguing the stores and causes loads of issues.

Injecting HTML into theme templates is not a good idea for some reasons such as when a merchant uninstalls the app, the button will remain and they won’t know how to get rid of it. So after installed Debut themevagain, the store is clean with an exception which makes the product to now have 3 variants, such as 1+, 2+ and 3+ which leads to Breaks in Quality from a leftover.

Moving forward, the load time is later back at 0.9 seconds as the initial test for a bare-naked Shopify store. After that, the next is to install VITALS and activate the 7 features such as Facebook Messenger Chat, Products Reviews (still using the same reviews imported from Loox), Free Shipping Bar, Currency Converter, Resent Sales Notifications, Product Bundles and volume discount.

Product Reviews:  this section received and display reviews with photos and also import them from Loox or judge.me

Currency Converter is another feature on VITALS is currently converter and this helps to convert prices in 160+ local currencies. This is the best currency converter that helps to auto switch based on customers geo-location.

Another is Wheel of Fortunes, this is interactive leads collection which makes customers to spin and win discounts. Also, not forgetting the Bulk Discounts that creates quantity price breaks and is based on how many items a customer buys.

Recent sales pop-ups is another feature on Vitals and It takes the part of displaying social proof by showing recent sales pop when customers are surfing through the app. Trust Seals and Badges is a premium badges to inspire trust and increase conversion. More so, over 30 trust seals are carefully designed in 6 different layouts.

It also used a secure payment such as VISA, PayPal, MasterCard etc. All VITALS apps work perfectly together without any flaw, everything is designed to work with everything else.

Vitals follow Shopify’s best practice by not editing customer’s theme. That is, all customers will not have leftovers if they uninstall and can safely preview the all apps on their stores before customer sees them.

So that sales pop won’t be showing in future, but still wanted to see it in there. Once visitor lands on your store, the script file will be cached in their browser for 30 minutes. So for each subsequent page view, the script file will load directly from his local cache, with no need to access internet.

If you don’t have VITALS app or you have not heard about it, I really suggest looking it up and installing it. If you have a bunch of apps in Vitals app that is costing way more than $30 monthly (they are constantly increasing and adding apps that are in the store and as well optimizing them for better results) it’s just going to get better and better so if you have not heard about it, I highly suggest you checking it out.

An effective email marketing strategy may appear to have many moving components, which may seem…

In this Wise Review. We look at how to create US Bank Account for non-US…