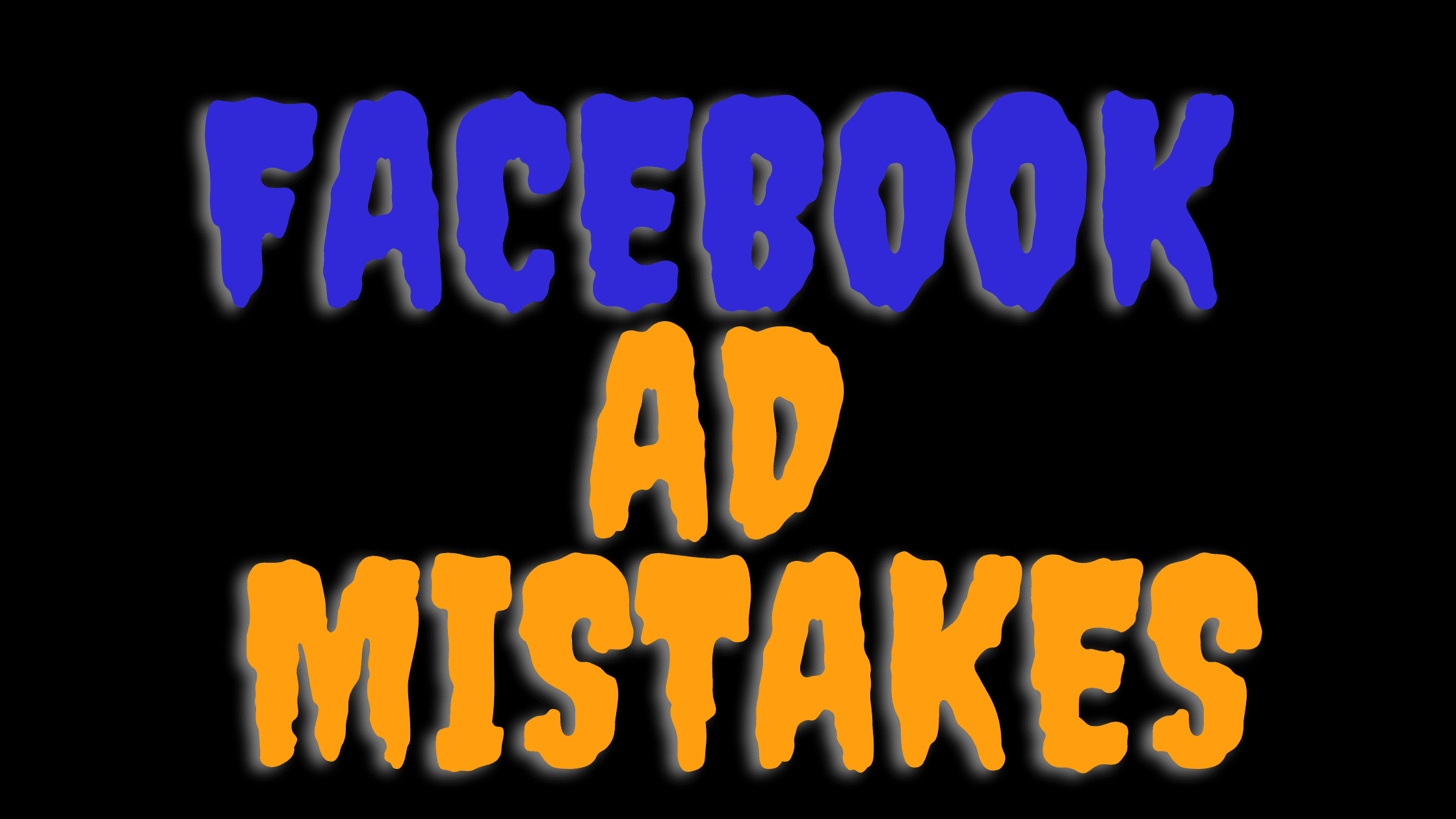 Are you spending tons on Facebook Ads hoping to generate lots of leads but methinks you just flushed your ad budget down the drain with little to zero conversions?

It’s a well-known fact that Facebook is one of the largest and most powerful advertising platforms available to businesses of all kinds to leverage in hitting their target audience.

However, as a self-made entrepreneur, it might be discouraging to realize how much trial and error and steep learning curves are involved initially, much more so when wagering real money on tangible outcomes.

1.Failure to make an initial investment in audience research

Having a good ad targeting the wrong audience, or is it best to have a lousy ad in front of the right audience?

Which one do you believe has a better chance of succeeding?

I’d wager that having the right audience comes first.

Facebook has a broad audience, and depending on what you’re offering; your audience may be larger, smaller, or even entirely different than the one you intended to target.

First, you’ll need to test specific audiences before moving on to more particular ad copy or format elements. However, that does not exclude you from making some educated predictions.

An intelligent way to think about targeting is to consider if you would be prepared to wager money on the likelihood that those people would be interested in purchasing your product-which is technically what you are doing.

Perhaps some of them will, but a wide variety of people on Facebook enjoys Starbucks; the current estimate puts it at over 33 million. You’re looking for a niche that corresponds to your products.

If you’ve picked a niche product, e.g., t-shirts for individuals who own pugs, you’ll have a far more straightforward job than someone whose products don’t appeal to a specific audience.

One of the most effective strategies for identifying potential target interests is to put yourself in the shoes of your customer:

Investigate and see what you can discover about their interests that set them apart from the crowd.

Suppose you come across a Facebook page relevant to the information you discovered throughout your investigation, like it under your personal profile.

Facebook may propose linked pages that may include other interests that you can target. Again, disregard those that lack a clear relation to purchasing intent.

You can leverage Facebook’s Audience Insights tool to generate more targeting suggestions based on the interests and characteristics of which you have a good sense.

Additionally, you may use it to gain insight into how that audience behaves, their spending habits, and more if you’re inquisitive.

2.Failure to optimize your ad creative for clicks and eyeballs

Once you’ve identified your target audience, a compelling creative campaign can help you increase your outcomes.

Numerous factors contribute to the success of an ad. The following are some best practices to consider:

3.Failure to isolate the subject under examination

In marketing, insight is frequently overshadowed by the imperative to get outcomes. And, while experimenting and testing with your ads are encouraged, you can truly learn as you go if you only test one variable at a time.

To avoid the Common Facebook Advertising Mistakes that entrepreneurs make, you need to first appreciate that different testing audience at various times with varying Facebook ads will not tell you much, even if you discover something that produces higher results.

Was the audience the culprit? Was it the ad that sparked your interest? Was it a coincidence of dates? Was it the result of several factors coming together?

To the extent possible, isolate a single variable to test so that you can proceed with actionable knowledge following the experiment. You should initially test at the Advert Set level with the audiences you’re targeting.

Bear in mind the following aspects of your Ad Manager account that you can modify and test:

4.Failure to capitalize on all available insights

Many Facebook Ad Manager functions remain buried in their intricacy, particularly when viewing your performance to gain insights.

For instance, the default columns in the Ad Manager do not display all of the data that is genuinely important to you. You should customize your columns to obtain additional data lest you get sucked into making the Facebook Advertising Mistakes as many newbies.

Consider including the following to gain a better understanding of ad performance, in addition to anything else you believe will help:

Additionally, you may use the “Breakdown” options to examine your ad success depending on various parameters, such as the devices used to make sales and the effect of gender on performance.

Additionally, you may adopt an effortless but highly effective practice of utilizing a uniform, understandable naming convention at each level of your Ad Manager account. This way, you can see at a glance who you’re targeting and what you’re testing.

Another Common Facebook Advertising mistake is paid to advertise, regardless of platform, targets too broad an audience.

While you may believe that everyone is a potential consumer, the people who see your ads are what you’re paying. Why would you spend reaching the wrong audience?

Say, a target audience of between 500K to 1.5 million makes for a decent starting point for many eCommerce enterprises.

If your audience is too large, consider limiting it down by focusing on interests that your primary audience “must also share.” If it’s too tiny, consider expanding the pool of users by adding interest until you hit the optimal spot.

6.Underutilization of your ad budget

The other effective way to avoid Common Facebook Advertising Mistakes is knowing that even though your primary objective is to generate sales, it is not the only return on your advertising investment.

Indeed, more value is derived from an ad that “failed” to generate any buyers.

It is possible to:

There is also the vital insight that purchased traffic can provide.

I strongly urge that you install Google Analytics and Hot Jar and monitor how your traffic behaves on your website. This will assist you in determining whether the issue is with your audience, the layout of your website, or something else.

Heatmaps, in particular, such as Hot Jar, are beneficial because they enable you to monitor how visitors behave on your website visually: how far down the page they scroll before leaving, what they click on, and as recordings of real individual visits.

When it comes to paid advertising, it’s easy to feel as though you’re wasting money if you do not see immediate results.

Occasionally, you may feel driven to seize control of your ads and alter them to “optimize” them as quickly as possible.

However, acquiring data and insight is critical, particularly at the start.

That is why it is critical to have a firm grasp on the amount of money you are prepared to spend to acquire a single consumer.

Among the Common Facebook Advertising Mistakes  is exasperation. You can’t afford impatience.

Assume your cost of goods is $25 and the product is selling for $58. This leaves you with around $33 to spend on customer acquisition before breaking even.

Be prepared to spend more than that initially as you test your audience and ads.

Make no adjustments to your ads, such as pausing or modifying them, until you reach 1000 individuals. At that point, you’ve gathered enough data to derive some insight from the performance of your ads, even if they generate no sales.

Another way impatience might hurt your performance is by preventing Facebook from learning over time. If you haven’t already put the Facebook Pixel in your Shopify store-which is relatively easy to do, check it out (Here), you should do so.

The Pixel is used by Facebook’s advertising platform to track and learn from user behavior to enhance targeting.

If you initially set your campaign’s target to optimize based on purchases, Facebook may not understand what a “purchasing” consumer looks like if you have no sales. However, as more purchases are made, that data set gets more accurate.

Thus far, what have you uncovered?

While Facebook advertising might prove challenging to master, as one of the most successful ways to spread any message, it’s undoubtedly worth investing in and glean insight from others’ experiences.

Facebook is one of the most accessible and powerful advertising channels for businesses. Before adding more specific ad copy or format elements, you’ll need to test specific audiences first.

The Audience Insights feature on Facebook can help you target ads based on the interests and attributes of your target audience.

The Pixel is a tracking and learning device used by Facebook’s advertising platform to improve targeting. You should add the Facebook Pixel to your Shopify store if you haven’t already.

As a marketer, you are not immune to the seven Common Facebook Ad Mistakes listed above. However, if you want to get a higher return on your investment, Facebook gives you a better way to target potential customers based on their interests.

This way, you avoid the Common Facebook Advertising Mistakes, which can lead to increased spending with little to no results for your business.

Thus, what lessons have you taken away from your ads? Leave yours in the comments section below!